One of the great things about South America is that everyone is so much more relaxed about life.  In Britain, we’re always rushing around, but never really end up going with the flow of life.  Here on the other hand, things just tend to happen, plans don’t always succeed, but hey, that’s life, and it’s not worth worrying about.  Two good examples of that have happened to me today (so far).

The first involved a visit to the exploration site.  We left the mine at about 8:30, and were driving up the track towards the site. 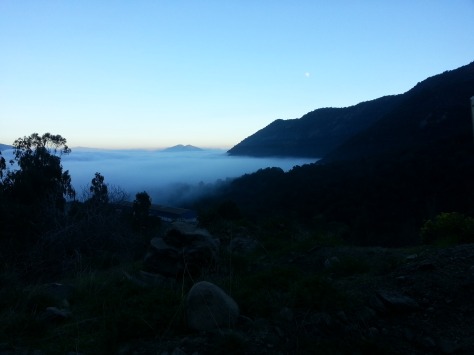 The river we had to ford (which wasn’t a problem last time – see previous post entitled “Time to Explore” for pictures of the area etc.), was now quite high, and so we couldn’t pass (without risking becoming beached on a rock, without any immediate method of rescue).  So, we just went back to the mine (via a beautiful small village, famous for making woollen clothes), where we bought a kilo of avocados for about £1.20.

Upon returning to the office, the next instalment of “things that didn’t quite work out according to plan” was encountered.  The basic plan for my time in Chile is to work for four weeks at the mine, and then spend the next six weeks in the desert.  However, my boss has just informed me that there’s a “minor problem”, and so I’ll be spending at least two more weeks at the mine.  Quite what the problem is, I don’t know, but anyway, that’s the situation.  I don’t really mind though, as I’m enjoying my time here at the mine anyway.