The fact that you’re reading this (and I’m writing this) means that yes, there does happen to be wifi at the camp, which ironically means the facilities in my room here (which is a shipping container) are actually better than those found at the mine itself!  I did have all the backup posts lined up, but I’ve postponed some of them (I’ll publish a couple about food though soon).

So at 4:30 this morning, I got up, and headed to the airport for my flight to Calama.  I managed to get a window seat which was brilliant. First, I got to sneak another peek at dawn over the Andes, which is always nice.

I also flew over the Atacama, and so was able to see it from the air. It looked so desolate it was unbelievable!

The Atacama Desert from the air

Shortly after, I arrived in Calama, and disembarked the plane.  The city is at about 2200 metres of altitude, which equates to the same amount of air pressure roughly as inside the plane whilst airborne, and so there was no need for ears to be popped on the descent.

My boss was waiting for me outside, and soon, we were driving off to the field camp.  It was about 100 miles away from the city, and the scenery was incredible.  It was very flat, with nothing at all, just sand and rock, and a tiny bit of snow on top of the highest mountains.  We drove past San Pedro, and San Pablo volcanoes, the summits of which are about 6000 metres or so. 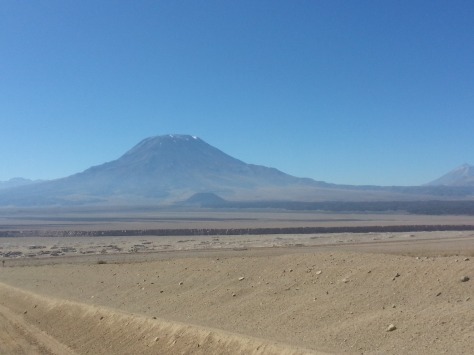 San Pablo and San Pedro volcanoes. You can see a lava flow to the right hand side (the black horizontal bit) and a new cone developing to the front

We kept driving, and eventually made it to the camp, at an altitude of 4100 metres.  The altitude means that the air pressure is only about 620 mbar (about 62% of that at sea level), which also means there is significantly less oxygen (and 72% blood oxygen saturation). However, for the time being at least, I feel completely fine, so I hope that doesn’t change.  It is exceptionally arid up here though, and you can physically feel your lips drying out which is interesting!  More details about the camp to follow in the next (not Santiago themed) post.