This post has changed a bit from the original one due to various unforeseen… incidents, so I’ve put approximate times in each paragraph detailing the evolution of the post!

21:00 – As I write this, the storm is raging relentlessly outside.  The container is creaking, and the noise of the wind is incredible.  Snow is being blown all over the place, and I’ve had to lock my door for the first time since I’ve been here, owing to the fact that it blew open a few minutes ago, such was the force of the wind, and deposited a rather picturesque dusting of snow indoors.  A couple of hours ago, I took a brief video of the blizzard outside, which you can watch here (although since then, it does seem to have got worse, rather than better).

23:00 – Unfortunately, a few minutes ago, my internet connection has actually failed, so I don’t know when I’ll be able to post this.  For reasons that I assume are to boost the wifi signal in the other containers, the router is kept outside, and uncovered, as this picture from a couple of minutes ago rather hilariously illustrates. Snow, ice, wind, and wifi routers don’t mix kids! 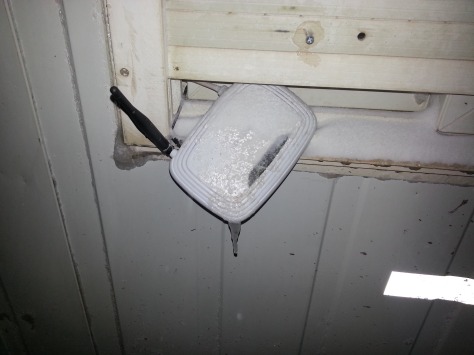 I’m pretty sure that fieldwork is unlikely to happen tomorrow, given the strength of the wind.  If it stays like this all night, it’ll be another quiet day in the camp.  Quiet is an relative term here, as I was writing that sentence, an absolutely enormous gust of wind hit the container (I can see the walls moving!), and I genuinely was rather worried about whether it can withstand the force!  Additionally, the door would have blown open again had I not locked it.  I really really really hope the lock holds, as otherwise, things will get a bit nippy later on, and dying of exposure is not on my to do list!

00:00 – Turns out that the lock on my door came off second best against the wind, in spite of a valiant effort. Apparently shutting and locking a door won’t stop the wind opening it. I was rather taken aback at this particular development, especially as I was just falling asleep to some rather peaceful music. Needless to say, the sight of my door bursting open, and a gale blowing snow right in my face dispelled my drowsiness with unrivalled efficiency. Some rather colourful language later, I managed to hop to the door (as I was in my sleeping bag), and shut and locked it again. Not trusting the lock this time, I tied my boot lace around the handle, and a point inside the container (very Blue Peter if I may say so myself). Testing it out demonstrated that the door could still open a small amount, but it was the best I could manage under the circumstances! Hopefully this third shutting mechanism won’t be necessary!

00:30 – The door has burst open again, but luckily the shoe lace is holding it (for now). Not really sure what to do at this point, things seemed to have got a little out of hand! Is it apt, or horribly ironic that I happen to be listening to “It Came Upon The Midnight Clear” at the moment? I’ll be brutally honest, it’s bloomin’ freezing outside, and I dread to think how high the wind speeds are! If that shoelace doesn’t hold, well, let’s just say that I hope that this sleeping bag is sufficiently robust! On the upside folks, what an anecdote!

00:45 – Feeling the temperature dropping rapidly, I decided that I needed to reinforce my door closing system. In true geologist style (transferable skills anyone?), I tied my compass-clino around the door handle, and to that tied my handlens set (to which a large rock was hastily attached) – accompanied once more by a liberal dose of colourful language. I’m not especially optimistic as to the efficacy of this “improved” design, but it’s worth a try. I can feel the whole building shake with some of the gusts (with the walls moving of course), which only adds to my doubts. Give me that earthquake any day! 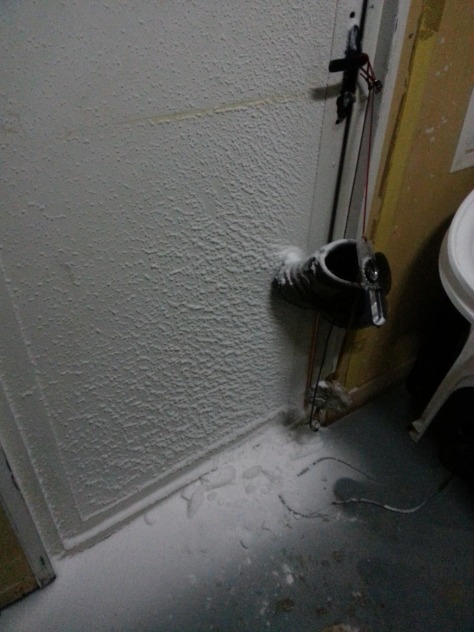 07:15 – Having survived the night, I’m enjoying a rather warming breakfast of bread, cheese, and hot chocolate. Every cloud and all that! Internet seems buggered still, so I’ve volunteered to dismantle the router and give it a bit of a dry. Turns out it was pretty full of snow, so hopefully it’s not been permanently damaged!

08:45 – The wifi router is now in front of an electric heater to warm it up a bit. Outside, the storm still rages like a lunatic with anger management issues on speed. Pretty ridiculous really, and it’s bagged me another day off. I’m writing this from the wired connection, but unless the wifi gets back up and running, there won’t be a lot of time when I’m online.

15:30 – The storm has calmed a bit (although not much), and the wifi has been written off.  However, GOOD NEWS: The field assistant appears to have fixed my door (thanks to the trusty crowbar), so hopefully I won’t be getting any more chilly surprises tonight!  I have noticed however, that after the particularly violent gusts of wind, a light flurry of snow comes through the ceiling next to my bed!