It’s time for another alliterative title for a post, and it’s been a busy week this week.

I turned up on Tuesday morning to find one of my colleagues smiling at me, and telling me to be careful when I opened the packet my tea’s in.  I was intrigued, and upon entering the office, saw that the lid was kept shut by the addition of a small rock.  Foolishly I assumed that he’d probably put something like one of those spring powered joke snakes that burst out when you open the lid.  How wrong I was.

Being a cautious fellow, I took the rock off carefully, and tentatively opened the lid, very slowly.  Inside, I saw a leg, and thin, brown, hairy leg.  I should have guessed.  A tarantula (of the same type as I saw on the weekend).  I took the box to my colleague’s office laughing, and asked if it was alive.  It was, and we released it onto the desk, before picking it up.  While the tarantula was rather intimidating, it was perfectly harmless, and a couple of minutes later, we released it unharmed outside.

Anyway, moving on.  Last night was my final night at the mine, which was rather sad.  On the upside, we had a big barbecue, of sausages and a huge slab of beef (along with salads etc.).  One of the field assistants was in charge of cooking, and given that he used to be a butcher, was the perfect man for the job.  He cooked the meat perfectly, and it was delicious. 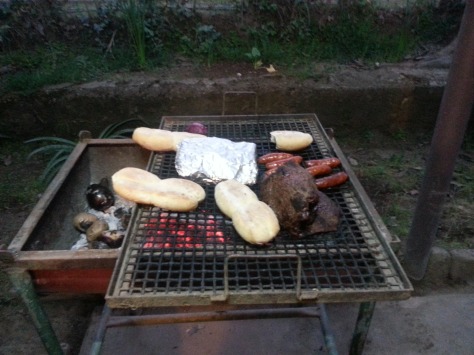 After eating, my colleagues very kindly gave me a gift, of some traditional chilean games, including a trompo, which is a traditional chilean spinning top, which you power by throwing.  I wasn’t very good, and definitely need a lot of practice, but apparently it often takes a few years to be good at it, so I wasn’t discouraged.  We played this for a while, and had a lot of fun, before calling it a night and heading to bed.

Anyway, all good things must come to an end, and sadly, today is my final day at the mine.  However, there’s an exciting week ahead, as on Monday morning, I’m off to Easter Island for the week, and I’m looking forward to that a great deal.