Last week marked the end of my final field trip with my university.  Like all field trips, it was as usual, enormous fun, with a lot of hard work thrown in.  Typically, we were working between 09:00-18:00 every day, with a one hour talk at 19:30, but in true student fashion, we partied at night too.

We were staying in a small town called Carboneras about an hour or two south of Murcia, to the east of Almería, right on the coast of the Mediterranean.  The weather all week was in the mid 20s and sunny, which was a huge change to the normal conditions in Britain! Unfortunately my very pale complexion took a bit of a beating from the sun, but I tried to cover myself completely everyday, so only the side of my face and my hands got burned.  Yes that’s right, you can have sunburned hands…

Anyway, the geology was great, and there was a huge variety, with everything from metamorphic petrology (which was my favourite), to palæontology.

Oooo! Pretty! Metamorphic petrology in action. This is a crystal of kyanite.

On the met pet front, in addition to the kyanite we found (see photo above), on the last day, we went to visit an unusual volcano.  Due to some peculiarities about its formation, it erupted a large number of garnet crystals, which were now just lying around on the inside of the crater.  (I’m a massive garnet fan, especially as my master’s research project was all about garnet).

Something cool that was pointed out to us was that a lot of the third Indiana Jones film was filmed around where we were, such as this beach scene to name but one.

On the final night, our lecturers took us out to a local restaurant for a traditional paella.  It was amazing!!  Pretty much every type of seafood you could possibly imagine was thrown in, along with various meats like chicken/rabbit/etc. 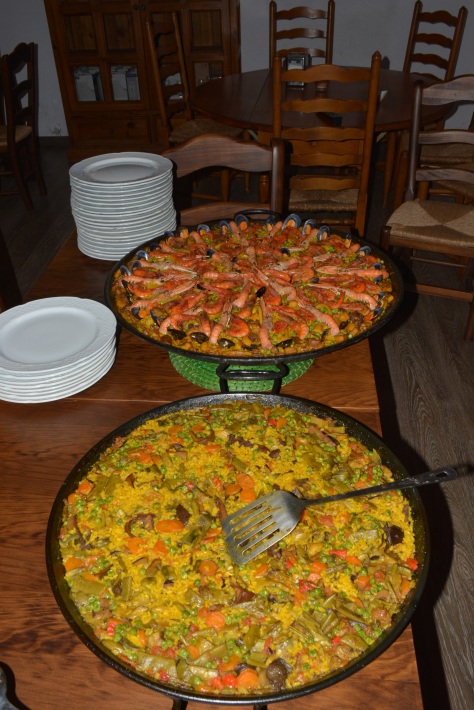 Overall, it was a lovely way to finish my university geological field career.  It’s been pretty good for field trips (this was the ninth one), and they’ll be sorely missed after I graduate.

Well, that’s it.  My final lecture ever has been and gone, and now it’s the end of term, and I return home on Sunday afternoon.  Only one more term remains, most of which will be taken up with revision (AJ, you know you miss the UL times we had, don’t deny it)!  In other news, various things have been going on!

Yesterday was the Sedgwick Club conference, which is a new thing this year, I guess inspired by the Imperial one that was on in February. It was a lot of fun, and we had a lot of interesting talks, as well as being able to catch up with the Oxford geologists (some of whom I met when they came down for the annual Geology varsity football match a couple of weeks ago), as well as meeting some Imperial geologists.

Job hunting still isn’t going especially well.  A graduate geologist job with a company in Cambridge that I was really hopeful for rejected me this morning which was a bit of a pain, but on the upside, I’ve got a phone interview early next week for a job in Woking, so hopefully that’ll go well!  It’d be so handy to have an interesting job already lined up before I graduate, and I’d be able to have a delightfully smooth transition to the real world (where the fun of council tax, mortgages, utility bills and TV licences awaits).  This job looks really interesting too, so fingers crossed that I’m lucky!

I’m off to Spain next week for the ninth and final geology field trip of my degree which should be a lot of fun.  The rocks are pretty diverse, with everything from metamorphic petrology to palæontology being represented.  I’ll bung up some photos of it when I’m back.